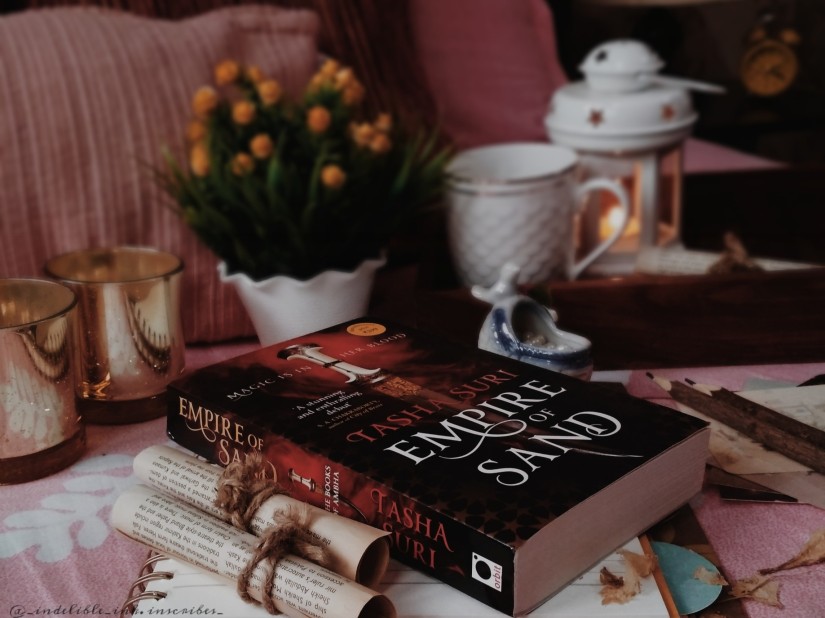 Mehr is a girl trapped between two cultures. Her father comes from the ruling classes of the empire, but her mother’s people were outcasts, Amrithi nomads who worshipped the spirits of the sands.
Caught one night performing these forbidden rites, Mehr is brought to the attention of the Emperor’s most feared mystics, who try to force her into their service by way of an arranged marriage. If she fails in their bidding, the gods themselves may awaken and seek vengeance…

Now all that was left for her was to survive.

I’ve such a soft spot for Indian-inspired fantasy and the premise of this book totally had my heart. Tasha Suri’s Empire of Sand has dreams, storms, conflicts, and dances. Inspired by Mughal Era of India; it is a story of a resilient woman, Mehr who strives to prevail in the empire where her people, Amrithi are loathed.

I totally loved the world built by Suri right form the beginning of the book. Characters were strong, I was in the urge to know about Mehr. It was an absolute page-turner but suddenly somewhere it all halted.

Indeed this book was slow-paced from the beginning and I was quite liking it. Everything was appropriately elucidated. But it lacked all the wow moments I was looking for. I was expecting it to be more unpredictable and astonishing. Maybe I had too many expectations just because of the premise. That whenever something important or any conflict actually happened it didn’t felt like “Gee-whiz!! I’m thrilled”.

I even felt that few characters were irrelevantly introduced at the beginning because we hardly read about them anywhere again.

She ran and ran, ran until the storm swallowed her, until she was flying, until everything was light.

I totally adored the first half of the book. Suri introduces us to the world with a strange mystic system with classical dance. Though I love how this book has depicted a significant and powerful character of a woman but I just couldn’t connect to the later part of the book. Since this is totally my opinion so I’d still recommend reading this book without any high hopes, perhaps you may find it to be more enthralling.

Thanks to @hachette_india for the #gifted copy.🌻

Link to buy the book.

A poetess lost in pages! Books, coffee and lots of faith✨ View all posts by indelibleinkinscribes